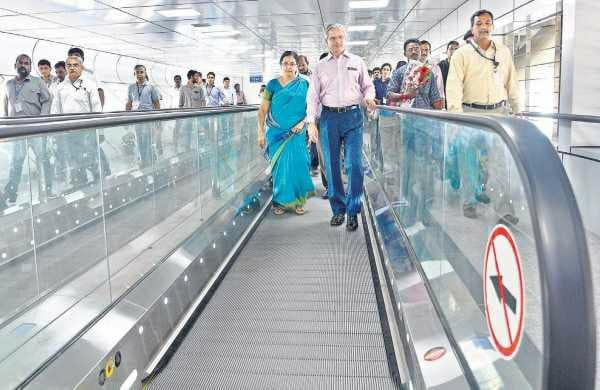 The walkalator connecting the Chennai international and domestic terminals with the Metro station has been inaugurated by Chief Secretary Girija Vaidhyanathan in the presence of Civil Aviation Secretary R.N. Choubey on Sunday. The walkalator built by Airport Authority of India is 602-metre-long. From April 14th, the passengers will also have self-check-in counters at the airport Metro station from April 14.

“The 12 walklators of 30 metres each have been provided in a stretch of 602 metres. The project cost for phase II works is approximately Rs 40 crore,” Mr.Choubey told the press during inauguration.

The passengers using the Chennai Metrol rail for commute to the airport will no more have to walk or wait for buggy cars operated between airport terminals and metro station. There had been complaints from passengers of non-availability of buggy cars and confusion over moving from one facility to other, in the past. With the introduction of walkalator, these complaints will no more be relevant.