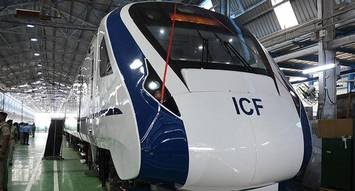 Train 18, the much anticipated Indian-made trainset was unveiled to the public by Indian Railway Board chairman Ashwani Lohani, at the Integral Coach Factory in Chennai. This swanky semi-high speed 16-coach train is set to replace the existing Shatabdi Express, which is running since 1988. Train 18, that will run at a maximum speed of 160 kmph, is expected to reduce the travel time by 15% as compared to the Shatabdi Express.

The train has 16 coaches, including 2 executive coaches. More than 80 per cent of Train 18 components have been manufactured in India. The train was designed by the ICF with the help of consultants without any clause of technology transfer.

Here are some of the premium features that make train 18 special (as reported by Business Today) :

o    Onboard Wi-Fi and infotainment

o    Motorized alternative coaches to ensure even distribution of power

o    Two executive compartments with 52 seats each, while trailer coaches comprise 78 seats each

Indian Railways is now working on the next-gen train 20, which is an advanced version of train 18. This is expected to replace Rajdhani.