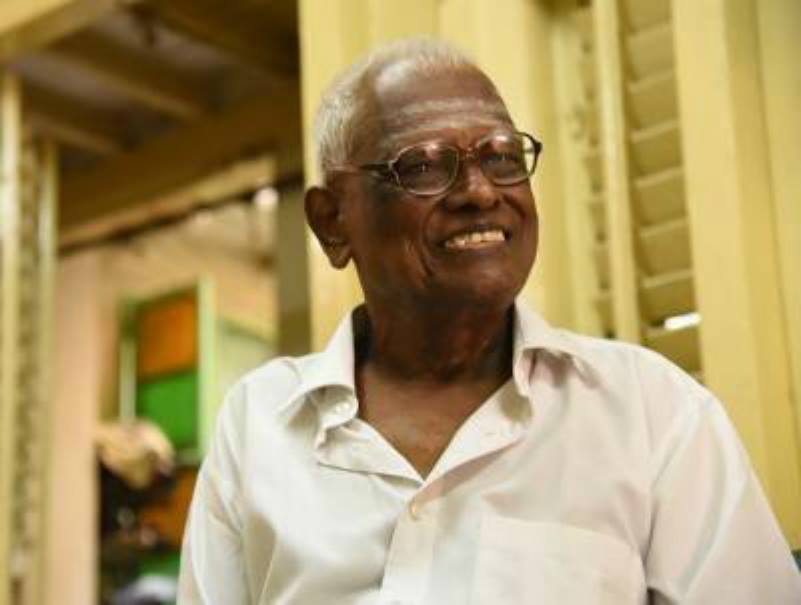 Stories of selflessness are hard to come by, and when you do come across one, you consume every ounce of positivity from it. So, when we stumbled upon this story of an 84 year old man feeding free food to hungry people, we were inspired.

Every day, Mr.Subramani, from Chintadripet in Chennai, serves afternoon meals to the hungry and needy, for free. This 84 year old, originally from Panruti in Cuddalore district, has been carrying out this noble act for years now and he doesn’t believe in talking about it.

“Once you start talking big about the things you do, it losses its goodness”, Times Of India reported Subramani as saying.

As a kid, Subramani grew up seeing his family doing the virtuous act of annadanam. A young Subramani was inspired by his mother offering food to everyone who turned up hungry at their doorstep and she would urge her son to do the same. Subramani lost his mother very young, but the virtues she instilled in him, stayed on.

After Subramani’s mother’s death, his father re-married and the family went through a phase of financial instability, eventually making them shift to Chennai in search of jobs. Those were the times when Subramani and family struggled to even have one meal a day. TOI reported Subramani as considering this a life-changing experience, for this would make him take a pledge to feed those in need, when he has the means to do it. A hard-working Subramani mastered the craft of Goldsmithery in Chennai and eventually saved up to buy a house in Chintadripet.

This was when Subramani took the first step towards materializing his dream of giving food to those who can’t afford one square meal a day. He started off by serving food to 1000 people once a year, on the Thaipusam day. On the day celebrated to commemorate the occasion of goddess Parvathi giving her son, lord Murugan, a Vel to vanquish the evil, Subramani, abled by the virtues instilled in him by his mother, started his journey to fight the evils of poverty and hunger around him.

By 2004, he started offering food to people on a monthly basis. “I would invite around 35 people to my house and feed them.”, TOI reported Subramani as saying. But,he wasn’t satisfied, as he continued to come across people struggling for a meal every day. That is when he appointed two cooks to prepare afternoon meals and started serving people on a daily basis. 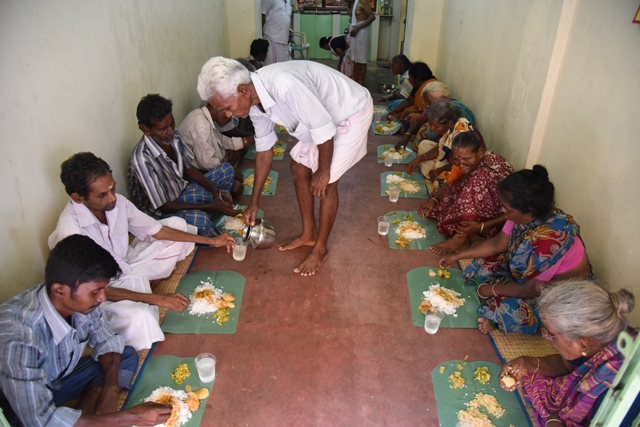 “Just because it is free, I don’t compromise on the quality of food. I ensure I get the same quality of rice, oil or veggies that we consume, for annadanam.“, said a proud Subramani to TOI. He also serves a proper elai saapadu on auspicious days, with a sweet.

Subramani starts issuing tokens every day morning at 8 am. He issues around 20-25 tokens daily. He usually has people walking in without a token and they will be served after those with the token are served. The token system helps him to have an idea of how many people to cook for and help prevent wastage of food. Subramani doesn’t accept any donations. He is feeding the hungry every day with the help of savings he has made and also with the money his five children give him on a monthly basis. The kind-hearted man spends around Rs.1000 everyday on the meals and serves food on all days except Sunday, Deepavali and Pongal as he wants to give his cooks the day off.

Subramani is determined to feed the hungry and needy for free as long as he is alive and hopes his children will continue to do so, even after he is gone.

My Chennai salutes you, sir!