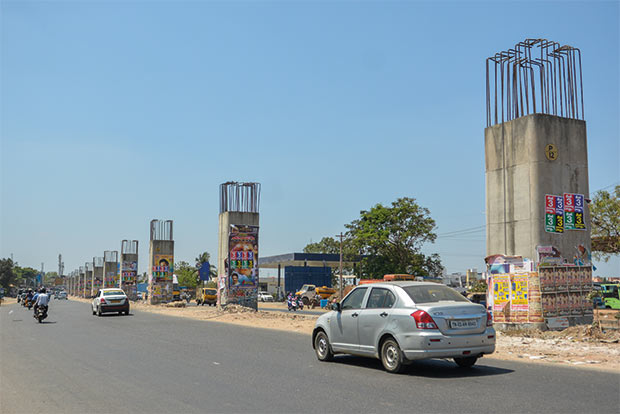 The proposed four-lane 19-km Maduravoyal-Chennai Port elevated corridor project is finally getting to see some light at the end of the tunnel. The much delayed initiative will now be a six-lane project up to the Napier Bridge. The New Indian Express reported that efforts are underway to get the required clearance before re-launching the project that has been stalled for last 5 years.

The project will have 10 exit-and-entry ramps. There will be no major land acquisition and the project will be implemented along the river bank, where encroachments will be cleared. The exit ramps are proposed at Kamarajar Salai, Spur Tank Road, and Koyambedu (before and after the grade separator) and entry ramps are proposed at Sivananda Salai, College Road and Koyambedu (before and after grade separator), reported Indian Express.

The number of piers along the river Cooum will be 685 after revised allignment and will have no impact on the river.

Chennai port, whose business has been affected by traffic congestion, would be one of the beneficiaries once the project is completed. “Once the project is completed, we will be one of the leading ports and will be getting a lot of business from car firms, which includes export and import,” Indian Express reported a port official as saying. The corridor will reduce the travel time from Maduravoyal to port to 25 to 30 minutes.

Two or three wheelers will not be allowed in the corridor to avoid traffic congestion.