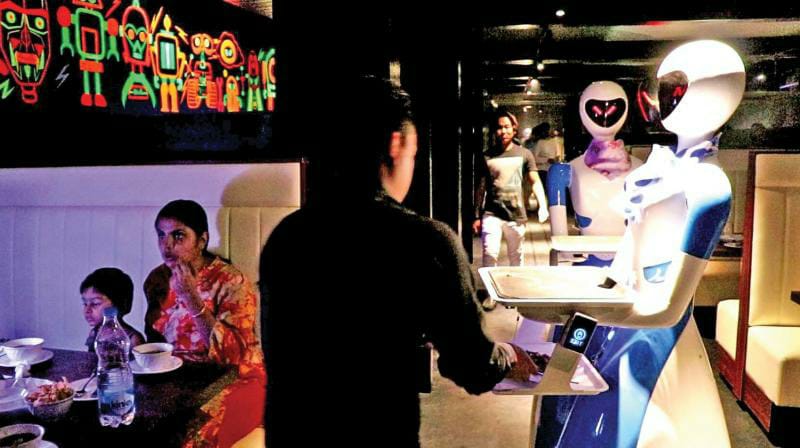 Chennai could now boast of having the first robotic theme based restaurant in India. In Chinese restaurant MOMO,located at Old Mahabalipuram Road, dumplings are served, hot and tasty, by robots.

Yes, you read it right! At Chennai’s MOMO restaurant, now relaunched and rebranded as ROBOT,  you will be greeted and waited on by robots. The restaurant has 4 robots serving dishes to the customers.

The restaurant has been founded by a former IT employee Venkatesh Rajendran and Karthik Kannan. “MOMO was quite popular among our customers for its authentic taste, but it wasn’t something out of the ordinary. After 747, I wanted to bring something new to the people.”,  Karthik had told Deccan Chronicle.

At MOMO, the customers could place an order through iPad without interacting with a human waiter. The orders get sent directly to the kitchen and once it is ready, robots pick it up and serve it to the customers.

Venkatesh, in an interview with The Hindu, said that the robots were battery operated and can be controlled through sensors. They have been programmed in such a way that they know which dish goes to which table, and also stops if someone blocks their path.

There is a selfie corner at the restaurant for customers to take selfies with the robots.

Chennaites have taken to Instagram sharing videos and images of this first of a kind experience in India.