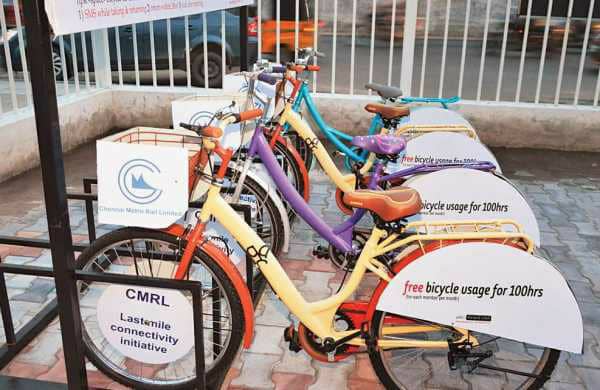 Kochi based Athi’s bicycle club has launched free cycle  services at three major metro stations in Chennai, Vadapalani, Shenoy Nagar and Nehru park. Each station has 10 cycles made available part of the pilot project. With Athi’s bicycle club providing free cycles for commuters to ride, Chennai Metro’s problem with last mile connectivity has been addressed to some extend.

Athi’s bicycle club boasts of successfully carrying out similar initiatives in Kochi and other metro stations.

The initiative was opened to the public on September 30th and the commuters don’t have to spend a single penny to use the cycle. All one has to do is to send an sms with the station code. The cycle club members will give a confirmation call to the customers and share a cycle code. The cycles would all be number locked and the code to unlock the  cycle will be sent to customer via sms after the confirmation call.

The other rules include returning the cycle within 24 hours, locking it after return and restricting the usage of cycles to 100 hours a month.

Alandur, Koyambedu and St. Thomas Mount stations are next considered for this initiative.