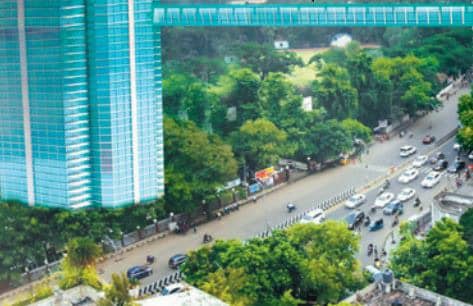 Chennai’s skyline is undergoing constant transformation and the TNHB is planning on giving the private builders a run for their money by coming up with a plan to build the city’s tallest building in Nandanam. The senior officials in the housing and urban development department has come up with a plan to build a 50 storey skyscraper that will be linked at 20th floor to a 35 storey highrise,via a skywalk across Anna Salai, in the site of Periyar building in Nandanam.

The cost of the towers is estimated somewhere between Rs.700 crore and Rs.750 crore and the concept is based on the Petronas Towers in Kuala Lumpur, Malaysia. The project is at a conceptual stage and government is looking at Public-Private Partnership model for its development. “The architects have already prepared designs for the skyscrapers.”,Times of India has reported an official as saying.

The twin buildings will be a financial hub spanning an area of about 25 lakh sq ft. The towers, when built, will be taller than the House of Hiranandani which is currently the tallest structure in Chennai.

The plan is to use these towers as commercial space and rent it out to financial institutions. It’s expected to bring in Rs.240 crore in rent annually. “The airport is only a 25-minute ride from Nandanam and commuters will also be able to use metro rail to get to the airport, Central station,” Times of India reported an official as saying. The metro rail line will pass directly in between the towers.

4 thoughts on “Chennai’s tallest building planned in Nandanam; to be modeled after Petronas Towers”