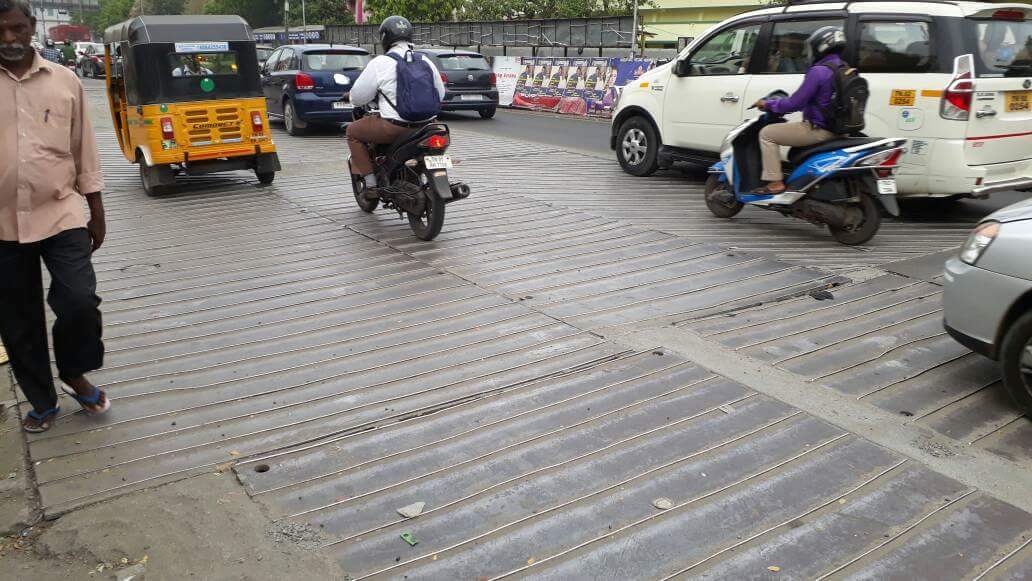 This road had caved in this April leading to an MTC bus and a car plunging into a huge crater that was formed in the middle of the Anna Salai, near Gemini Flyover.The vehicles fell into a hole that had been dug up for the construction of a Chennai metro line and closed later. Although no one was injured in the accident, this incident raised a lot of concerns among people regarding the safety of the roads being dug across the city for the construction of Chennai Metrol Rail.

This incident has made motorists vary of the city roads and now they are hesitant to use the part of road laid with iron plates. Chennai Traffic Police has been issuing statements requesting motorists to cooperate and ease the traffic congestion in this area.

“There is a slow movement in Anna salai incoming direction in front of Gemini fly over, because of  the hesitation of motorists avoiding the  iron plates laid for CMRL work. The motorists are advised to use the part of the road having iron plates, as it is equally safe as the tar road.  Motorists commuting on Anna salai from Nandhanam are advised to use Chamiers road , TTK road, Music Academy junction, Gowdiya Mutt road, Tower clock, Whites road and reach Anna salai. Motorists are requested to cooperate.” – read a request issued by Chennai Traffic Police.