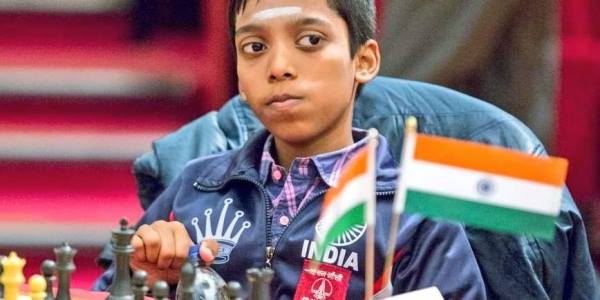 Chennai boy Praggnanandhaa has become the country’s youngest and the world’s second youngest Grand Master at the age of 12 years, 10 months and 13 days after reaching the final round of the ongoing Grendine Open in Italy.

The 12 year old was paired with Grand Master Prujjsers Roland in the final round. Praggnanandhaa needed to play an opponent above rating of 2482 in the ninth round of Grendine Open to make his third GM norm.

Ukraine’s Serget Karjakin who achieved this feat at the age of 12 years and seven months in 2002, remains the youngest ever Grand Master.

This is not the first time Praggabanandhaa has grabbed the attention of Chess enthusiasts. In 2016, he became the youngest International Master at the age of 10 years, 10 months and 19 days.

Yet another Chennai lad and five time world champion, Viswanathan Anand, was one of the first few to congratulate the Chess prodigy. “Welcome to the club & congrats Praggnanandhaa!! See u soon in chennai,” he tweeted.

“I am overjoyed. He has put in a lot of hard work. Credit goes to my wife, who accompanies him to tournament and is very supportive. Due must be given to coach (Ramesh sir),” The New Indian Express quoted Praggna’s father, A Ramesh Babu as saying.